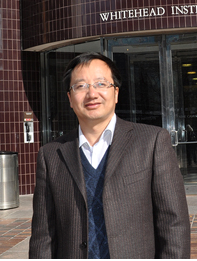 Hua Li studied chemistry for his Bachelor’s degree in Yan'an University from September 1979 to July 1983. He got his Master of Science from September 1985 to July 1988 and his Doctorate of Science with Researcher Qiang Su and Researcher Lu Xu as his mentors from September 1993 to July 1996 in Changchun Institute of Applied Chemistry, Chinese Academy of Sciences. From July 1996 to December 1997, he conducted post-doctoral research with Hong Gao, Professor of Chinese Academy of Sciences as his mentor. Later, he served as a visiting professor in the Center for Process Analytical Chemistry, University of Washington from 1998 to 1999. During his work in the United States, Li was sponsored by the U.S. National Defense Research Fund, paid a short-term visit and gave lectures in the U.S. Naval Laboratory (NRL) and Arizona State University. He served as visiting professor in Masaryk University, Czech Republic from September 2000 to July 2001, and in the Institute of Applied Chemistry, University of Reutlingen from September to December 2001. Besides, he studied in the special training class for management and operation cadres at Ritsumeikan University, China, from September to October 2007.